Blockchain is a constantly growing ledger that keeps a permanent record of all the transactions that have taken place in a secure, chronological, and immutable way. It can be used for the secure transfer of money, property, contracts, etc. without requiring a third-party intermediary such as bank or government. Blockchain is a software protocol, but it could not be run without the Internet (like SMTP is for email).

A blockchain is a constantly growing ledger which keeps a permanent record of all the transactions that have taken place in a secure, chronological, and immutable way.

A blockchain is a chain of blocks which contain information. Each block records all of the recent transactions, and once completed goes into the blockchain as a permanent database. Each time a block gets completed, a new block is generated.

Who uses the blockchain?

Blockchain technology can be integrated into multiple areas. The primary use of blockchains is as a distributed ledger for cryptocurrencies. It shows great promise across a wide range of business applications like Banking, Finance, Government, Healthcare, Insurance, Media and Entertainment, Retail, etc. 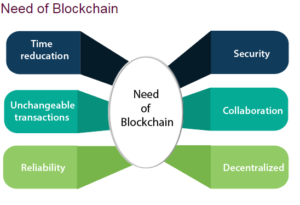 Blockchain technology has become popular because of the following.